I was in visiting Herself in hospital yesterday.

In walked Nurse Diesel, as always pushing her thingumyjig on wheels.  You know the yoke?  It’s a sort of pole with a load of little diagnostic gizmos on top with cables and tubes hanging off it.  Nurses plug patients into it and it gives readouts on blood pressure, pulse, temperature and all that stuff.  It’s simple enough but it looks important.

I should add at this point that there was an old trick in my RTE days.  If I [or anyone for that matter] felt like a break, a bit of fresh air or [more likely] a smoke, the trick was to walk between building with a clipboard or a bunch of random files under the arm.  Bosses always assumed I was heading for something important like a meeting and left me alone.

My theory is that Nurse Diesel pushes her gizmo around just to look busy and important without ever actually using the damned thing.  It is also the perfect excuse to poke into any room or ward for a snoop.

Anyways, in comes Diesel into Herself’s room.  As luck would have it Herself was having a drag on her electrofag [apparently they don’t allow smoking in hospitals].

“You know that’s against the rules!  Put that thing away” she barked.  It actually was like a bark from one of those little ankle biter dogs.

“And what is she supposed to do?” says I.  “What is the alternative?”

“Do I stop eating and drinking too?” Herself asked.  Diesel’s face turned from righteous superiority to pure anger.

“You are to bring that thing home with you now” she snarled at me!  She emphasised the word ‘thing’ like it was a turd on the floor.

To be honest I was stunned for a moment so by the time I had a suitable response Diesel was out the door along with her gizmo.  Anyway I had Granddaughter the Younger with me so I couldn’t retort with my more obvious vocabulary.

I reckon Diesel is a Care Unit Nurse Trainer. 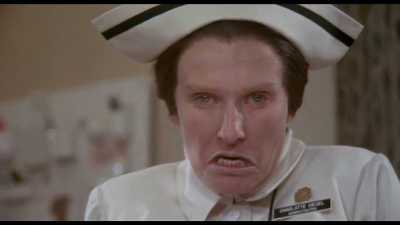