I bought Herself her stash of fags yesterday.

Once again, they have changed the packaging.

Some months ago, they changed the design on the packs.  This seemed a little strange as you could only see the design after buying a pack.  They must have realised this as they changed it back again.

Then they produced tins, which I thought was a great idea.

Then the tins were no more and we went back to the ordinary packs again.

Then I tried to buy a pack of twenty to be told they were discontinued and that the packs were bigger and contained 23 each.

Yesterday it seems the supply of ordinary sized packs of 20 are back in the running again and there is no sign of the tins or the 23-packs.  However the design is definitely different. 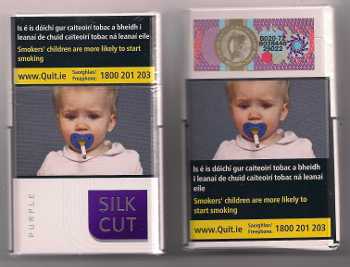 So what the fuck is going on here?  We now have anti-smoker propaganda front and back, so is this the new “plain pack”, or is it merely a transition phase? I am utterly confused at this stage.

I have to admire the new invention though.  It’s ingenious!  As the Young Wan commented in the shop – “Start ’em early.  Great idea”.  Who could argue with that? 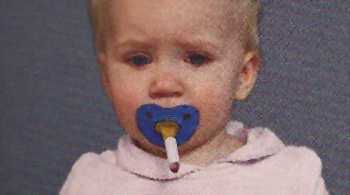 Are we going back to the good old days of collecting cigarette cards, only collecting tokens to get a free Child Starter Kit?

It’s a pity the youngest Granddaughter is beyond the soother stage now, or I would have got her one.

She’ll just have to smoke ’em the normal way.