Well, I finally went and done and did it.

After years months weeks hours of procrastination I took the plunge.

I knew there were many pitfalls and dangers involved such as loss of vital data and even the possibility [God forbid] that I should be cut off from the world altogether, but it had to be done.

I upgraded my mobile phone. 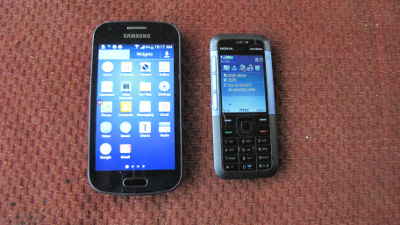 Well, actually it was more a case of downgrading but upgrading just sounds better?  Sure isn’t that what all the kids are doing these days?

The old [newer] one still has all the functionalities of all its gizmos, such as a little reminder of birthdays and tools for seeking out free wifi signals.  The new [old] one has the amazing ability to answer calls just by pressing a button.  No slidey fingers!  No irritating messages blocking things!  Someone phones me – I just press a little button and I can talk.

Actually the new [old] one is lucky to be alive.  It has a teenchy little bit of discolouration on the top of the screen from the time in France when I dropped it into a big mug of scalding tea.  A blast of a hair-dryer sorted it though.  It has been around and suffered quite a few slings and arrows in its time.  It wasn’t long after that that I bought a new one which is now an old one.  I just checked and the messages suddenly stopped nearly five years ago, so it has had a good rest.

Apart from being a lot handier to use, there was one thing I noticed almost immediately – it doesn’t need recharging all the time.  It has been going for two days now and that even included a long period where I had the Bluetooth switched on [so I could use the SatNav as a hands-free phone while driving], yet it still is indicating a full charge.  The old one just sucked the bejayzus out of the battery even when it was doing nothing and I had to charge it every fucking day.

Spanner is calling to collect the car.

And I was able to answer straight away!