A few evenings ago I was down in the pub when one of the Lads admired my pipe lighter.

I had some problems with lighters over the past couple of years and the one I have now is a Peterson which is a sort of superior version of the American “Old Boy” and a lot cheaper.  It replaced another Peterson which fell apart just after I bought it.  The latest one though has been working brilliantly for well over a year and the only problem I ever had with it is that sometimes the flint sticks and has to be reloaded.

So I sat there on my stool extolling the virtues of my lighter.  I said it was reliable and my pal admired its looks.  I could tell he was envious so I told him where to buy one. 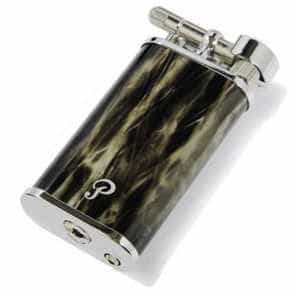 Later, I was at home and decided to light up.

Yes, you’re ahead of me.

The fucking thing refused to light.

The gas tank was full and the flint had loads of life but for some reason it just wouldn’t work.  I cleaned it, I scrubbed it, I poked needles in the gas jets but all to no avail.

I used a disposable one for the first time in many months.

I have come across this strange phenomenon before.  There was the time Herself bought me a raincoat on the journey to West Cork and it resulted in a massive heatwave and drought.  If I replace the windscreen wipers on the car, we are guaranteed another drought.  Herself bought me crampons for my boots after a winter of snow, so I wouldn’t slip on the way to the pub, and we haven’t had any snow since.  The list is endless.  And now the mere mention of something good turns it bad.  I’m not superstitious but I do sometimes wonder….

Herself saw my frustration with my lighter and suggested I buy a new one for my birthday [in this house we buy presents for ourselves rather than for each other as we tend to know better what we want].  I dillied and dallied but in the end decided that maybe she was right – time to buy a new one and all I had to do was wait until the shops reopened after the long break.

Yes, you’re ahead of me again.

No sooner had I decided to buy a new lighter than the old one started to work perfectly again.

Of course, now that I have written that it’s working, it will doubtless fail again before the day is out.

Likewise we are probably going to have a blizzard within days.