When I started writing here nearly ten years ago I hadn't the faintest idea where I was going.

There was no plan or topic.  There was no intention other that to have a bit of craic and to see what happened.  If I had known that I would still be at it all these years on I probably wouldn't have started.  Initially I just scribbled off bits of whimsy but things seemed to have changed over the years.

So what brought about the change?

There was no singular occurrence, but just a gradual increase in frustration over the years.  My frustration was leveled at the so called "scientists" with their ever more ridiculous pronouncements, but even more so at the number of people who believe wholeheartedly in the utter bilge that was coming from the "scientists".

I am not a scientist [a true scientist, not one of those pocket-stuffing cunts with an agenda – they are not scientists] but I base my arguments on two simple things that require no knowledge of statistics or studies, but are based solidly on history and common sense.

History tells me straight off that all the talk of the "damage caused by smoking" is a right load of steaming crap.  In the last century nearly everyone smoked.  Yes, people died from respiratory diseases, but there was also a lot of pollution – does anyone remember smog, where visibility was down to a few yards because of coal smoke?  No one died of second hand cigarette smoke and its concept would have been a joke.  You would have been laughed out of it for even suggesting third hand smoke!

Yet now we are told that smoking causes a vast range of ailments but where is the evidence from history?  There isn't any.  And because people have "read it in the papers" the majority are scared witless by a wisp of smouldering leaf?  They believe that a brief "exposure" to a bit of tobacco smoke will cause irreparable damage yet are happy to hold regular barbecues in their garden which produce in the magnitude of thousands times more smoke?

So I am angry.

I am angry at those who because of their own little agendas and greed have stoked the fires of fear with their "studies" and their "reports".  They have done massive damage to society, causing death, unemployment, fear and loneliness without a scintilla of real evidence.  They really are the personification of evil.

I am angry at the politicians who have been led by the nose into passing laws which restrict freedom and interfere in everyone's lives.  They are criminally negligent in the treatment of the individual

I am angry at the Bovine Masses who believe all the shit that is shoveled at them on a daily basis without any thought, and who not only believe it but will shovel it out themselves to anyone who'll listen.  They are just criminally stupid.

But I am tired of being angry.

So where do I go from here?

I suppose I could go back to fluffy little stories about Penny, or give a daily account of what's growing in the garden?  I could tell tall tales of village life [I’d have to do some invention there – it’s a sleepy village].  I could write about my aching bones?

I planted a House Leek last year at the edge of the terrace. 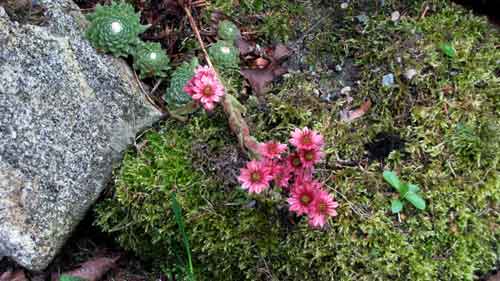