I must confess I am a little intrigued by this Brexit lark.

As an outsider, it is like a slow motion view of a major rail disaster.  Two express trains heading towards each other on the same track.  Each knowing the other is coming and each piling on the throttle in the hopes they'll push the other off the rails and stay on track themselves.

What really intrigues me though is not the vote, but how it will be received in Brussels.

My view is that they cannot allow a Brexit.  They have put sixty years of effort to move towards a United States of Europe and a Brexit would be a disaster.  The ship is barely afloat at the moment, and a Brexit would be equivalent to hitting an iceberg – the ship might not sink immediately but they'd have to run the bilge-pumps a lot harder.

So how are they going to react if the UK votes to leave?

Well, they could apply the Irish solution – tell them they got it all wrong and demand another vote until they get it right.

Another scenario is that post election, Brussels will announce that a new retrospective rule states that the Leave camp must have a minimum of 90% of the votes, and that the Stay camp have therefore won.

Or they could decide that the referendum was a statement of desire from the British people but that the final decision rests with Parliament?  The lads in Westminster don't want to upset their pals in Brussels, so that vote would be a foregone conclusion.

Or Brussels could just decide to ignore the outcome and carry on regardless.with their Fourth Reich Project.

I cannot see Brussels sitting back and just letting a country leave their cozy little setup.  It would cause too many ripples and [Heaven forbid] encourage other countries to go down the same path.  It would to all intents and purposes be a massive kick in the bollix.

So I shall watch with interest.

From a selfish point of view I fervently hope Brexit succeeds as Brussels deserves their collective bollix to be kicked and a lot more besides.  Hopefully it would open the floodgates [or the stopcocks, to keep my shipping metaphor intact] and others would also demand to leave, leading the the final sinking of the whole monstrosity.

Martyn Turner sums it up nicely in the Irish Times – 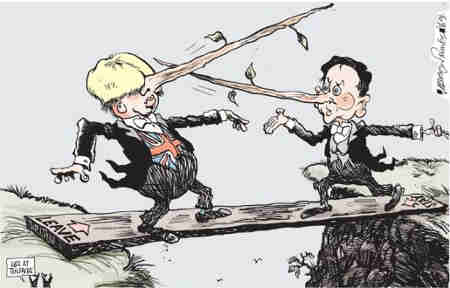