From the first of January If you smoke in a car that has a child in it, you will be fined €100

This is just another salami slice in the process of stigmatising and vilifying smokers.  It is also dangerous in the precedent it creates.  This is regulating how we can behave within our own property and the next step is to ban all smoking in all vehicles on the grounds that it simplifies detection.  That step will doubtless be introduced on the grounds of "driver distraction" or some deeply flawed "research" that states that a smoker's blood is 99% carbon monoxide and the driver is therefore incapacitated.  After that, who knows?  Banning smoking in private homes?

I still haven't worked out how this law will be enforced.  Check points won't work as all the driver has to do is stub his cigarette before stopping, which means he can only be caught on the basis of suspicion and smell of smoke.  Are squad cars going to follow motorists to see if they can spot the top of a wee head on the back seat while simultaneously smoke drifts through the driver's window?  Are they going to foot-patrol traffic that's stuck in traffic jams or at traffic lights?

On a passing note, a person can hold a full driving licence here at the age of seventeen.  Does the law then apply to that person if they are the sole occupant of the car?  While a seventeen year old cannot legally buy cigarettes there is no law to say they can't smoke them, so they would only be breaking a law that defends them against themselves?

It is an insane law and once again I shall not give it another thought.  The only effect it will have is that I won't bring any child on a long journey so no change there.

There are of course loopholes in the law.

The law applies to people smoking in a car with a child present.

It doesn't apply if the child is running behind the car and attached by rope [great exercise involved there?].

It also doesn't apply if the child is strapped to the roofrack. 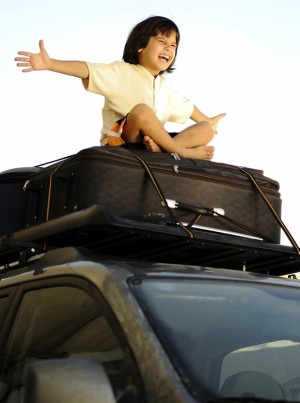