We have a budget later today.

We also have an election coming up in the next few months.

Put the two together and we know straight off that it's going to be a "giveaway" budget.

There will presumably be all sorts of exciting announcements about piling loads more money into the health service [i.e. into a black hole] and reducing taxes.  They seem to think they are being magnanimous when they reduce taxes but really all they are doing is stealing less from our pockets. Should I really thank a mugger for only stealing ten quid out of my pocket instead of twelve?

Taxes seem to have a unique property.  If they raise taxes it puts a huge hole in my bank account but if they reduce taxes I seem to come out of it with merely an extra quid or two per month.  Raise a tax by 1% and I really notice the difference, but reduce tax by 1% and the difference is negligible.  Weird.

I won't be listening to the budget or watching it on television.  I know in advance it isn't going to affect me except that I'll have to pay a lot more for my smokes, or alternatively make more visits to Man with a Van.

The real reason I won't be listening is that I cannot stand listening to that creep Noonan.  He has a voice like a bishop chatting up an alterboy.  He drones on in a humourless monotone that is guaranteed to put anyone to sleep.  I get the impression that the ony time he laughs is when he sees a kitten being run over.  I had a maths teacher in college once who had a similar voice.  He used to drone on in this monotonous dirge and it's no wonder I never really grasped the finer points of calculus as I was asleep for most of the classes. 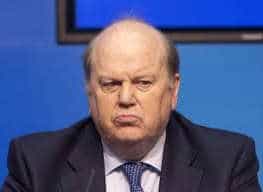 The dog has been rolling in shite again.  It's a long time since she last did it but she is covered in the stuff from head to tail and down all four legs and she stinks to high heaven.  I'm going to have to spend the afternoon chasing her around the garden with the hose trying to hose some of the gick off, as I can't let her back into the house until she smells slightly sweeter than a septic tank.

I'm not looking forward to that little job as invariably I'm the one who ends up soaked.

But I would rather hose shite off a dog than listen to that shite Noonan.