I have seen some pretty whacky off the wall research in my time.

This one should surely take the biscuit .  In fact if a student of mine presented this "research" as a thesis, not only would I give a resounding "Fail" but would boot the student clear into the shelf-stacking areas of Tesco.

I really don't know where to start with this one.

Let's start with the gigantic cross-section of society that was tested.  Four?  Four smokers and sixteen non-smokers?  Wow!  Dr Reissland didn't exactly break into a sweat over this one?  Extrapolating the results from twenty subjects is going to give a really accurate representation of society, isn't it?

Lets' have a look at her conclusion –

Unborn babies appear to grimace in the womb when their mother lights up, scientists have shown, demonstrating the harmful effects of smoking during pregnancy.

They APPEAR to grimace?  What kind of fucking science is this?  Could it be that the "researchers" were attributing their own prejudices to the images?  Surely not?  That would be unscientific, wouldn't it?

Using their methodology, I could examine a field full of cows chewing the cud.  But the cows nearest the road APPEAR to be reciting Shakespeare.  My ground breaking conclusion is that being near a road increases cows' literacy rates.  A load of bollox?  Of course it is, but I am using exactly the same criteria.

Equally I could look at those scans, and declare that the fetuses of the smoking mothers are in fact wriggling with joy whenever Mammy lights up?  But that would be contrary to the EXPECTED results so that can't be right.

The irony of the whole business is that there is one tangible, demonstrable result –

All the babies in her study were born healthy, and were of normal size and weight.

So, using the good doctors own yardstick, she has proved that smoking has no effect on babies whatsoever.

This surely is a new low for junk science? 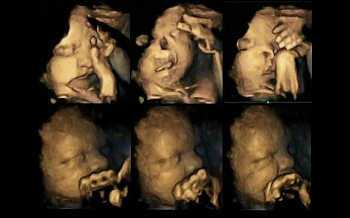