Our  gumbint are getting a little desperate at this stage.

And still half the country is refusing to sign up to Irish Water.

Their latest tactic is somewhat similar to the smoking lark – if you can't force smokers to quit, then invent second hand smoke and then the gullible public will force them.  However it is a little trickier inventing something like second hand water bills.  If I refuse to sign up to Irish Water, there is no way they can spin some sort of health effect on my neighbour.

They are trying a similar tactic though, by implying that somehow my neighbour will be paying for my water.

Their message is a simple one: Is it fair that the woman sitting beside you on the bus, or the man in the house next door, is refusing to pay their way when you have forked out?

My response to my neighbour [should they ever be foolish enough to spout that crap] is "aren't you the right fucking eejit to be paying twice over for your water".

Their other line is even funnier –

“If you come to a supermarket check-out and say, ‘No, not paying the bill’ and walk off, that’s not the way the system works.”

Of all the pathetic spins they could have come up with, that's the worst.  My response again is very simple – if I pay for my groceries at the checkout and then find a second checkout at the exit door, then yes, I will refuse to pay and I will walk off.  That's the way my system works.

They are trying the old ploy of "divide and conquer".  They have already tried that with the protests trying to convince us that anyone who protests is a criminal and a lout, but that didn't work.  They even tried arresting protesters to prove they are criminals, but the law said otherwise.

So now they are trying to set neighbour against neighbour?

Judging by the number of water pipes sticking out of the ground and waving in the wind up my lane, that isn't going to work either. 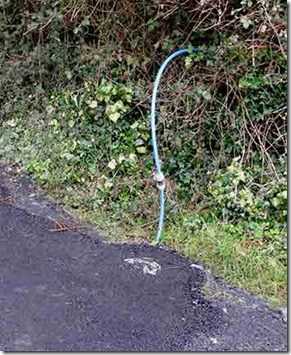