You are all familiar with the Corridor Two Step?

You know – that dance when two people try to pass in opposite directions in a corridor or passageway?  Facing each other, you both step one way and then the other way while smiling apologetically, until you or the other flattens themselves against the wall and says "for fuck's sake, GO!".

There is a modern version of this and it involves mobile phones.

It happens to me quite a lot, and it happened again this morning.

I checked my phone and realised that as usual it had died the death through lack of battery.  I switched it on with the intention of charging at and it asked me for my security number.  In the middle of prodding the screen it died the death again.  I plugged it in and switched it on once more.  It lit up all right and made its irritating noises but the little card wasn't activated and there was no way to reenter the security code,  I had to switch it off and on again which is a pain in the arse and typical of the useless piece of shit.  God only knows why I bought the fucking thing in the first place.

Anyhows, none of that has anything to do with the Mobile Phone Two Step.

That started when my phone warmed up and informed me I had missed a call.  It showed the number and told me I could return the call if I pressed "Dial".  The only snag is that my phone doesn't have a "Dial" button – it just has a little icon that I have to repeatedly thump, but the icon wasn't on that screen, and if I went to the screen that had "Dial" I would lose the number.  I wrote the number down.

I dialed the number.  There was no reply so I disconnected.

A short while later the phone rang so I answered it.

"I know I did but you rang me before that."

"Ah!  So I did" I replied.  "That was because I was returning your call, after you rang me."

This was beginning to confuse even me.  I decided it was time for the "for fuck's sake GO!" moment.  I explained how he had phoned and I had missed the call.  I had then phoned him and he had missed the call and that he was now ringing me to find out why I was ringing him to find out what he had being ringing me for in the first place.  This didn't really help as it confused me even further, and God knows what he was thinking.  We decided that it was all a mistake and one of us at some stage had dialed a wrong number [but it definitely wasn’t me].  There are times when it is better to cut one's losses.

Now none of this would have happened if it wasn't for that little display telling me I had missed a call.  If it's so fucking smart why can't it recognise a wrong number and ignore it?  That's the trouble with these fucking so called "smart" phones – they try to be smart but they aren't really smart enough.

None of that would have happened with a good old fashioned bakelite phone with only a dial on the front. 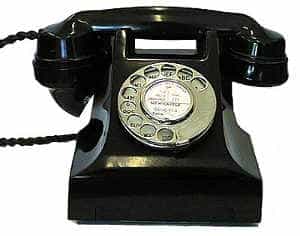