I have a sinking feeling in the pit of my stomach.

And what, you ask is causing this disquiet?

There is a conference on in Dublin today, held by Reform Alliance.

What's wrong with that and who the fuck are Reform Alliance anyway, you ask?

Well, Reform Alliance are a new political party who spends its time denying it's a political party.  It is essentially a bunch of rejects from the other parties, and when you examine the caliber of the main parties you'll realise how bad a motley crew they are.  And this non-political party is holding its conference today.

One of their leading lights is Lucinda Creighton who, as a leading light is about as bright as a 1 Watt bulb when it's switched off.  Need I say more?

So what has me so apprehensive?

They are full of ideological crap about reforming the political system but essentially they are just playing with the Titanic's lifeboats.  There is nothing new there that I have seen.  They want to reform this and they want to reform that but essentially we are looking at exactly the same scenario but with different faces leering at us from the television and milking us for all we're worth.

And worst of all, we'd have that empty headed bimbo Creighton cluttering up the news all the time. 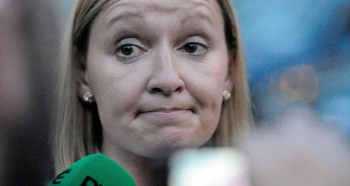