I am not a plumber.

Having said that, I did once install a full central heating system including a Baxi back-boiler fire with the aid of a library book and a lot of sweat.  When I cracked the input tap for the first time to fill the system, I only found one small leak and the whole thing worked beautifully.  I was proud of that.

So I'm not a plumber but I know a little bit about plumbing.

Now however, I am stumped.

I came into the kitchen this morning and there was a most peculiar racket.  It sounded like a cross between waves breaking on a shingly beach and a steam pump – rhythmic swooshing noises that were really load.  The fucking central heating was acting up.

I didn't install the system in this house, and I can't make head nor tail of it.  Apparently it's a "closed system" and it needs to be pressurised or something.  Instead of just a pump, it has a setup that would do an oil refinery proud, with little taps and guages and pipes going everywhere. 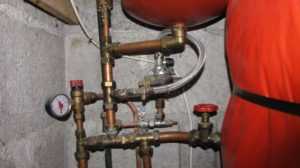 One of the dials is nicely hidden behind a pipe and faces away towards the wall so I haven't a fucking clue what it does or what it says.  I hope it's not important.

The one guage that I can see has a little red marker on it.  I have discovered through trial and error that if the needle drops much below the red marker that the system makes a bit of noise and the upstairs heating doesn't work.  I also discovered a tiny black tap just below what I assume is an expansion tank and if I twist that tap then the needle on the guage climbs up to the red marker again.

It's working all right now.  It's quiet and it's heating the house.

I got pissed off twiddling the knob though as it's not easy to reach, so I just left the fucking thing in the on position.

The needle is above the red marker now.

I'm just waiting for the explosion.