I never gave much thought to Lurchers.

I knew they were supposed to be the dog of choice of Gypsies but that was about it.  I decided to look a bit further.

For a start, a Lurcher is just a mongrel, but is a defined mongrel, which means that it’s cross between a Sighthound and a Scenthound.  And I had never heard of those either.  A Sighthound is apparently a dog that uses sight and speed to hunt, and a Scenthound is a ..  well, work it out for yourself.

Because of the Sighthound bit, Lurchers are fast.  They are not only exceptionally fast but they are also exceptionally lazy.  Someone used the description “a 40mph couch-potato” and that about sums up our Penny to perfection.

Another thing that I discovered is that Sighthounds have a thing called Double-Suspension Rotary Gallop.  Fancy name, huh?  Even my car doesn’t have that.  Apparently what that means is that when running, each full stride has two periods when all four legs are off the ground, and they use their spine as a sort of spring.

It’s kind of hard to explain, so I tried photographing the phenomenon.  And there I ran into a problem.  How do you photograph a dog that is so fucking fast that it’s gone before it has appeared?  I tried using a cine-camera mode and picking out frames and even then the images are blurred. But I nearly caught it – 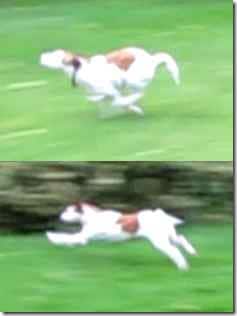 And there are the two airborne cycles.  In the top one, she is coiling up and in the bottom one she has released the tension into a sort of high-speed long-jump.

Make the most of those images as they are about as rare as a photograph of the Lough Ness Monster and just as blurry.

As I type this, our Penny is in her usual place – curled up and snoring gently on the couch.  I think she had a speed-fit earlier in the garden which is when she does several laps of the main lawn in a couple of microseconds.  It’s hard to tell though as these fits are over before they start.  I have more than a suspicion that the Theory of Relativity is coming into play here.

So here endeth the lesson for today.