I see the EU is set to launch a new salvo against the smoker.

There are a couple of interesting points about the leaked report however.

One of their targets is Snus [which I confess, I am not familiar with].  Apparently this is an alternative to smoked tobacco and is generally considered to be relatively harmless. 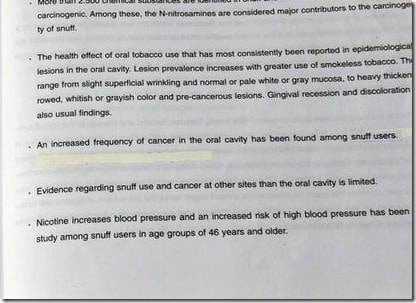 The image shows part of the report and you will notice a line which has been blanked using Tippex.

The line now reads ”An increased frequency of ­cancer in the oral cavity has been found among snuff users.”

The original line read ”An increased frequency of ­cancer in the oral cavity has been found among snuff users in North America, but not unequivocally in Sweden.”

Why the amendment?  Are they really so paranoid that they will remove anything that isn’t completely negative?

All that aside, the other cause for concern is that they are poised to ban the electronic cigarette.

These yokes are a relatively new innovation and as such there aren’t that many studies, but those studies that have been carried out generally find them to be harmless.  Logic alone would show that by eliminating combustion, and eliminating all these thousands of ingredients that are supposed to exist in conventional cigarettes would make them safer in anyone’s book.  If you go into any e-cigarette forum you will also find thousands of testimonies from people who have given up cigarettes in favour of the electronic equivalent.

You would imagine that the Tobacco Control Industry would welcome the e-cigarette with open arms?  It contains none of the carcinogens that worry them so much, there is no “passive smoke” and it is a highly effective cessation method.

So why is the EU set to ban them?

There can be only one reason.  The EU is set to ban all nicotine delivery products except those approved by the EU.

Maybe I should rephrase that?

The EU is set to ban all nicotine delivery products except those manufactured by Big Pharma.

Anyone smell a rat?