Since before Christmas, our County Council have been playing with their temporary traffic lights in my area.

They pretended they were doing work, but I knew better.  They were just fucking with my head again.  Why else would the lights always turn red just as I approached?

On Thursday last, they stepped up their campaign against me, and shifted those lights so that I couldn’t get out of the house at all.  I didn’t care as I had no plans on going anywhere anyway.

I was up early on Friday.  I was surprised to see machinery trundling past my place as it was only seven in the morning.   They drove up and down, mostly backwards judging by all the beeping that emanated.  I left them to it.  If they were trying to piss me off, they were going to fail.

They are a determined lot though.  They worked right through Friday, creating a hell of a racket, because at this stage they had started to remove the road.  They were drilling and banging and thumping all day.  They still didn’t annoy me though as it was pissing rain all day, so they were getting soaked and I wasn’t.  Guess who was having the last laugh?

To my amazement, when it started to get dark on Friday, they erected massive floodlights and carried on removing the road. 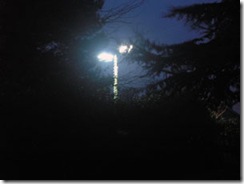 During the night, I got up for a piss bit of exercise, and they were still banging away and driving around backwards.  This was at around four in the morning.  I have never experienced such a concerted effort by my council to annoy me.  I just shrugged and went back to sleep.

Saturday morning, they were still there.  The road was completely gone at this stage.  They were still driving around backwards at the bottom of the hole, and were still making an unholy racket.  I left them to it as it was still lashing down.

Later in the day, I realised that all was quiet.  After about thirty hours on non-stop noise, the silence was deafening.

The rain had eased a bit so I went out to survey the damage.

They had put the road back again.

They had put the road back exactly as it was before.

With great care and precision, they had replaced each bump and pothole precisely in their original locations.  It was a masterful job.

I would say I dreamed the whole thing, but there was a lot of mud around still, and I had my photographs.

I don’t know why they have it in for me, but I admire not only their determination but the extent to which they will go.

But it’s no wonder the country is broke.