Today is a momentous day.

The troubles started last week.  Someone broke the toilet seat.  I didn’t do it, and Herself claims she didn’t do it.  Sandy isn’t heavy enough so we are blaming Minnie Pig.

Actually, I do vaguely remember a strange cracking noise last Tuesday night after that lock-in down the pub, but my memory is a bit hazy about the whole night so I may be mistaken.

Anyway, the seat has had a big split in it, which could act as a rather nasty vice and could clamp the arse of anyone who sits on it.  I don’t know how Herself has been managing, but for the last week or so, I have been – how shall we say? – abstaining.

The Accidental Terrorist was passing by the hardware store in town this morning and he bought a new seat.

It’s quite fancy.  It’s wooden though it doesn’t seem to have any splinters in it.  Yet.

I have just fixed it on.

It has been annoying me for a week now.

I have been dying to get it fixed.

The relief was enormous. 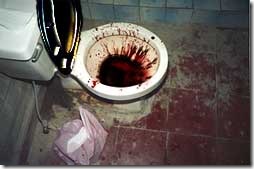