The last time my daughter called be a bollox was a long time ago.

Retribution was swift and involved petrol, matches and a Barbie doll collection.

She has called me a bollox again last night, but this time I’ll forgive her.  In fact I consider myself rather honoured.

I received an email that was entitled “Your bollox”.  I was going to discard it as I thought it was one of the usual enhancements that I’m offered regularly, and I don’t need any more of those.  I’m fully stocked.

Then I realised it was from Our K8.  She isn’t in the habit of sending me medical aids so I opened it.

Apparently she has awarded me her Dog’s Bollox of the Month Award.

To those of you who are not familiar with the expression, “dog’s bollox” is akin to “the bee’s knees” or “the cat’s pyjamas”.  It is very definitely an expression of approbation.  Why canine testicles should be a good thing, I don’t know.  Unless you’re a dog, of course.

Of these, only Kirk M of Just Thinkin’ has the courage to display it on his site, but then he is The Dog’s Bollox [with no insult intended to the others].  Maxi has displayed it on his site, but he is disqualified anyway because he asked for his.  He is just The Bollox.

So I have to get to work now and fix my new award onto the site.  This should be no problem as there are plenty of builders looking for work at the moment.

And the next time someone calls me a bollox,  I shall reply “Yes, I am The Bollox”. 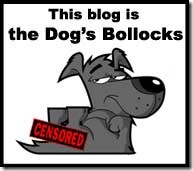