I am very impressed by our government.

They have been incredibly consistent over the years.

No matter what obstacles are placed in their path, they always manage to panic and do precisely the wrong thing.

It got me thinking.  Suppose our government had been in charge of the Titanic…… 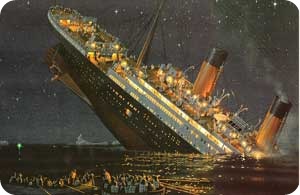 First Mate: Excuse me Captain, but some of the passengers say they can see icebergs ahead.

First Mate: But our lookouts are all in the bar celebrating the voyage.

First Mate: Captain.  We have just hit a massive iceberg.

Captain: That’s not our fault.  Blame the cold weather.  I MUST HAVE MORE SPEED.

Captain: All the more reason to move faster.  We have to get to port.  GIVE ME MORE SPEED DAMMIT!

First Mate: Shall I send out a distress call?

Captain: Are you saying I don’t know how to run this ship?  FASTER. FASTER.

First Mate: Captain.  The ship is going down fast.

Captain: Throw the life jackets and lifeboats overboard.  It will lighten the ship and we can go faster.

First Mate: It’s no good, Captain.  We are taking on too much water.

Captain: Throw the fucking passengers overboard.  That will lighten the ship.  Why aren’t we going any faster?

First Mate: Because we are at the bottom of the ocean, Captain.