John Gormless Gormley is not amused. 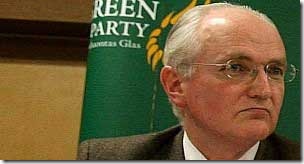 There again, I get the impression that the only thing that would make him laugh would be to see all the petrol supplies suddenly dry up.

So why is he not amused at this particular moment in time?

Have they decided to burn down all the rain forests?  Has Biffo told him that there is no future in their relationship?  No.

Apparently it is all to do with the Czech President.

I didn’t know this, but the Czech President is visiting us at the moment.  This is nice.  Maybe he is thinking of buying the country, now that we are worth nothing?  A Christmas present for his wife?

This really pissed off Gormless.  He stated that Klaus was here as ‘a guest of the state’.

So presumably the bottom line is that if you visit Ireland, you have to agree with the government?  You have to leave all your beliefs and opinions at passport control, to be collected on exit?

Maybe he would fit in better in a country that likes totalitarian regimes?