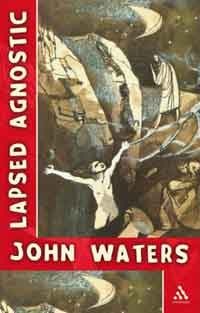 Herself was reading the Irish Times yesterday, and she came across a book review. “You should write about that,” she said.  “No,” I said. “I haven’t read the book.” But then I realised that I fulfilled all the criteria.

The book is “Lapsed Agnostic” by my old friend John Waters.

For years John Waters was a well known agnostic.  The nearest he came to religion was bopping Her Holiness Sinéad O’Connor.  I have no problem with his religious beliefs.  That’s his business.

Apparently he has found Faith [Can you catch religion from having unprotected sex with a priest?], and now wants to tell us all about it.

The review is by Yvonne Nolan.

“Who has not felt the dread of the amicable acquaintance who one day in the corner of an office or a pub or a party asks “Do you believe?”  You know what comes next: a hectoring conversation that asks you to repent or wake up or reconnect.  One thing is sure: you’re wrong, they’re right and you resign yourself to being pinned to the wall, nodding and feigning polite interest and vague agreement while you are patronised to within an inch of your life.”

“John Water’s new book Lapsed Agnostic is the print version of getting pinned against the wall of the pub snug, and is peppered with instances where Waters has tried to get the faith conversation going with a variety of squirming companions.”

Unfortunately for Waters, she describes his book as “a tough one to plough through” and “an incoherent work”.

I feel sorry for Waters.  He once had ambitions to become a priest, but abandoned the idea.  I think he would have made a good one.  But it would have had to have been back in the forties and fifties, where the priest’s word was law, and went unquestioned.  He wants to preach to us mere mortals, but is trying to do so at a time when we can answer back.

Frankly, if Waters managed to corner me in the pub snug, I’d be straight into the jax where I could scribble on the wall.  The toilet wall is, when all is said and done, the best place for passing waters.