It was an Austin Mini and was clapped out when I got it. It was red, which was great, because when the paint flaked off, the rust underneath was the same colour.

Few of you will remember the first Minis. They had a few distinctive features. One was that to start the car, you turned the key in the ignition, and then pressed a button on the floor to actually start the motor. The other was the windows. They didn’t wind down – they slid sideways. 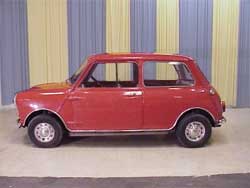 My Mini was well ventilated. In fact, if you pulled the passenger floor mat back, you could watch the road passing underneath. And it was always damp inside, so I grew a couple of beautiful ferns in the passenger door. Actually, I didn’t plant them – they just appeared.

It was a bit of a squeeze driving that car because I’m over six foot tall, but I didn’t mind that.

It had a personality of its own. Lots of things never really worked properly. The heating never worked, and the breaks used to fail on a regular basis. On one occasion, I was p*ssed out of my mind and the breaks decided to fail completely just as the lights ahead changed red. That car had a wicked sense of timing. I smacked into the car in front in an explosion of glass and rust. The car in front wasn’t damaged as the rust had taken all the damage. I had to get a taxi home. That cost more than the car was worth.

I had long hair in those days, and the police took great delight in stopping me to examine the car. I used to get away with it, as the tyres looked good, and the tax and insurance [£50!] were always up to date. On one occasion I actually got a summons – ‘no illumination on my rear identification plate’.

I went to court. The judge was in foul mood. All the cases before me were for similar trivial offences and as the plaintiffs’ excuses got more frantic, so the fines increased. By the time he got around to me, the fines were running at around the £100 mark.

“What’s your excuse?” the judge roared at me.

“None.” I said, “I knew it was broken but didn’t think it was that important. I was going to get it fixed the next time I was in town”

I loved that car. It was always breaking down, but the mechanics were so simple, it was very easy to fix at the side of the road. We had many very happy adventures together.

One frosty morning I went to go to work. I pressed the floor button to start the engine. There was a loud thump from the front, that didn’t sound healthy. I got out and opened the bonnet. The engine had fallen out and was sitting sadly on the ground between the wheels.

I knew its time had come.

I went and bought myself another Mini.

But it wasn’t the same.