Everything seems to be starting earlier in the year.

And of course, tourists are arriving earlier.

Our first tourist was spotted in early February. I wrote to the Irish Times about it to see if it was a record, but of course they didn’t print it.

This has led to some problems, as normally the Tourist Hunting Season doesn’t start until the 1st of May. But some of us have been getting edgy, so we have jumped the gun, so to speak.

We are basically a rural community, and as such have great regard for wildlife. We have no truck with those bastards who go hunting for deer, badgers or foxes. These are dumb animals who can’t speak for themselves, and hunting them is downright cruel. So we hunt tourists instead.

Tourists are arriving in ever increasing numbers. The government has done its best by inflating the price of everything to try to keep them out, but they are a major problem. They are filling up or roads, our hotels, our scenic spots and our pubs. They are loud and they are invasive.

Culling is the only answer. I know some of you will say it’s cruel, but it is for their own good. And we are as humane as possible. We don’t club them over the head or anything like that. We go for a good clean shot, or a quick road-kill. The numbers must be kept down, otherwise they will overrun the place and the indigenous species [the Irish] will be in endangered.

It is a very tricky sport, as tourists have an uncanny ability to disguise themselves as a native species. They have even stooped so low as to hire cars locally so that we can’t tell them by the registration plates. Fortunately the car hire companies have cooperated by putting identification stickers on their vehicles. In the end, they always give themselves away. Someone will produce a camera, or another will wear shorts in the heat of the moment. We know the signs.

Even though the season has only just started, I am racking up quite a good score. 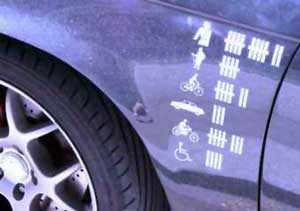