Is the government totally insane, or am I missing something?

At the end of the month another one of their incredibly inane laws comes into effect.

Since they came into power, this government has wasted billions at a time when they had a chance to really do something worthwhile. The Health Service is still in a shambles. Don’t even mention the elderly or special needs. We have a housing crisis, a spiralling crime problem, drug problems.. I could go on but you get the drift.

But this government is obsessed with smoking.

I’m not in favour of smoking, so don’t start whining at me. I enjoy the odd puff of the pipe, but I’m not a cigarette man at all, at all.

First they introduced the ban on smoking in public places. Pubs are now closing at the rate of one a day. The government won’t admit this – they put it down to other factors, but the publicans say that it is a major factor.

Now they are banning the sale of 10s. You can only buy 20 fags at a time. What, in the name of all that is holy, is the logic here?

I had my first cigarette when I was in school. We used to buy one on the way home. Yes – one. I think it cost 3d, including a match.

I didn’t get hooked. Many’s the time we wouldn’t bother. I suppose I smoked two or three a week. We did it for the laugh. In fact, in my last year there, I didn’t smoke at all. It wasn’t until I went to college that I started buying them in packs of ten. Then I had them in my pocket, so I smoked them. I got hooked. I switched to the pipe a few years later, but that’s a different story.

I presume the logic behind the new law is to dissuade kids from starting. How? If they can’t buy ten, they’ll buy twenty. It’s as simple as that. Kids these days have money, so it won’t make the blindest difference. It just means they will smoke more, because they have bigger packets.

According to Lynn Swinburne, Health Promotion Coordinator of the National Youth Council of Ireland –

“92% of young people report that they are not asked for ID when purchasing cigarettes. I am certain that if the provisions of the 2002 Public Health Act are enforced, whereby shopkeepers found to be selling cigarettes to minors will be banned completely from selling tobacco products, asking for ID will become the norm”

So here we have a typical Irish solution – instead of enforcing the existing laws, we have to introduce new ones. 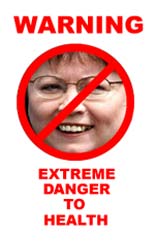 Harney -you are worse than useless. You are a liability. You are spending money like there is no tomorrow. You are pouring billions into the health service and for the last years all we ever hear is that it is “going to improve”. Jam tomorrow, but never today.

And now you are costing even more by bringing in a hair brained law which is going to exacerbate the smoking situation, rather than enforce a law that has been there for years that would actually work.