Some time ago, Herself decided to order some – what shall we call them? – intimate undergarments. She chose a company in the UK and asked me to order them on-line for her.

I had no problem with this. I do most of the on-line buying anyway. Even the groceries.

So I duly filled out the order form, and was very careful to enter her name and our address.

The company was very efficient. The order arrived swiftly, and it was precisely what Herself wanted. It came in a nice package with a friendly letter inside. The package was even nicely decorated so that, while being discreet, it left no doubt as to the contents.

And here is where the problem started.

You see, I had used my own credit card which [of course] had my name on it. I had also used my own e-mail address. Now they obviously took the credit card name as being the customer. A reasonable assumption. So the parcel arrived addressed to me. I also received an email saying they hoped the garments fitted all right.

My mother always taught me to reply to letters, so I wrote back to the nice lady, thanking her for the order and her nice e-mail. I told her that I hadn’t actually tried the garments on yet as I was the wrong shape. I did tell her though that Herself was wearing them and was delighted. She apologised. She said they would change the name in their computer. She never did though.

Since then Herself has ordered a lot more “items” from the same place. They always come addressed to me. I get nice brochures from them too, in clear plastic envelopes. I also get e-mails from them with nice pictures of pretty ladies wearing nearly nothing.

I hope the police don’t raid my computer, or I’ll be down as a sex offender. And the postman gives me very strange looks. In fact he has taken to throwing our post through the letterbox and running away. And I can’t go into the Post Office at all.

It has its upside though. I’ve just received a lovely e-mail from them advertising “The Trinny and Susannah Magic Knickers” with before and after photographs. I’ve a choice of “The Tummy Flattner Thong”, “The Bum Lifter” or “The Bum, Tum and Thigh Reducer”. I can’t decide which would suit me best….. 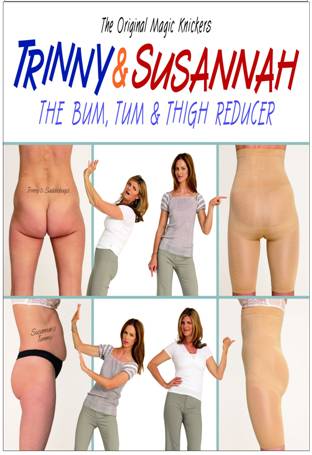