Before I go any further, I am not mentioning them because I am touting for nominations.  I haven't nominated myself, and I'm not asking anyone to nominate my efforts.  So there.

I am mentioning them because they got me thinking about this whole on-line scribbling business.

I had a look down last years lists and the thing that struck me is that the Irish "blogosphere" [to use SuperShadow’s term] is dominated by wimmin.  They are all out there writing about fashion and make-up, cookery and child-rearing and the likes of myself are fairly thin on the ground.  If there were an award for retirees, I would be in with an excellent chance.  If there were an award for sarcasm, grouchiness or salty language I would have the game sewn up.  As it is, I feel like a bit of a loner.

This year, the organisers are asking for the county of the site, which is a strange one.  I understand the reasoning [in case local papers want to brag about their local entries] but quite often there is little hint as to the origin of the scribe.  They also ask for the scribe’s email address which is fair enough, but I [along with a hell of a lot of people] haven't put my email address on the site, because I get enough spam as it is.

Anyway, as time goes on this has become less and less of an Irish site.  In the past, most of my readers were Merkans, but that has changed in recent times and now the vast majority of my readers are Brits.  They actually beat the Irish two to one and knock the U.S. into second place.  Maybe I should enter the British Blog Awards, if there is one?

In the meantime, head on over to the Nomination place and nominate your favourite sites, but not this one. 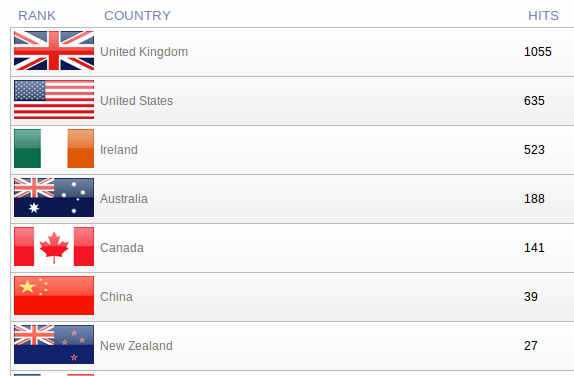