Where is Greenpeace when you need it?

Where is the Tobacco Control, Anti-Smoker lobby who is normally so active?

Where are those politicians who provide all those lovely caring laws to protect us from all the evils and dangers of the world?

We all know for a proven fact that the mere sight of a tiny cigarette can kill all children within a fifty mile radius.

The science is proved beyond doubt that burning a few twigs in the garden can cause global temperatures to rise by at least five degrees.

Yet the Evil Empire in the Vatican is not only pumping out CO2 and Dioxins by the ton, but the whole world is watching.  They even have fucking television cameras mounted and trained on the chimney.

The mind boggles at the crass carelessness of the Vatican. 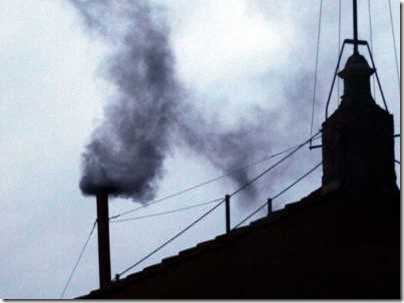 The Cloud of Death.