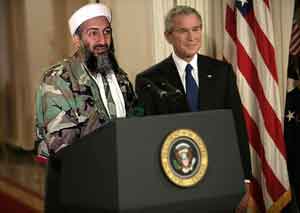 In a formal statement from the Whitehouse today, George W Bush and Osama Bin Laden announced plans to invade Switzerland.

“For too long now, this so-called neutral country has been aiding the axis of evil and in particular the despotic regime in North Korea” said the president.

When it was pointed out to him that Switzerland had only once sold a cuckoo clock to North Korea, Mr Bush responded

“Yes, but this is a precision piece of engineering required for missile guidance. This enabled the North Koreans to develop their Weapons of Mass Destruction.”

“Osama and I are working together on this project. We have the military might, while he has the expertise. He is the expert when it comes to fighting in mountainous territories. Besides, the Bin Laden family and the Bush family have been friends for many years. With the help of God and Allah, we will defeat this threat to the free world together.”

Through an interpreter, Mr Bin Laden explained that the events of September 2001 were, in fact a training exercise to test the effectiveness of an attack on a heavily guarded target. “George and I were delighted with the results” he added.

A reporter from the Washington Post asked why Afghanistan had been invaded, if Osama Bin Laden was such a good friend.

The President replied “Ah…. Well….. That was a bit of a mistake. We meant to attack Iraq but missed. I blame Rumsfeld and as you know, I have since fired him. We had to think of some excuse at the time, and Osama came up with the great idea that we were looking for him.”

Mr Bin Laden sniggered – “It’s no wonder they couldn’t find me. I was in Camp David all the time”

A reporter from the New York Times asked about the war in Iraq.

“That was another training exercise. My father gave me the idea. He has always been a bit annoyed that he never got Saddam when he had a chance. We decided to clean up his mess and train for our invasion at the same time. It too has been a great success. We have proved that we will be greeted with open arms by the population when we invade Switzerland”

Asked about the continuing violence in Iraq, the president replied

“That is mostly disinformation spread by Al Jazeera. Anyway, they’ll get bored now that Saddam is gone.”

George W Bush and Osama Bin Laden then left the podium to prepare for the forthcoming marriage between Osama and George’s daughter.