I was browsing through a forum this morning.

There was a topic there where people were discussing the best and worst Christmas presents they’d received.

With one or two exceptions, they were bitching about the stuff they’d thrown in the bin, or bragging about how much they’d received.

Frankly, if I knew any of them, I wouldn’t give them the time of day.

The Daughter arrived on Christmas Eve, along with her Fella [and a few of his mates, but they were good craic and didn’t stay too long]. The Grandchildren came too along with the dog who is very big and very stupid.

So, on Christmas morning we were up quite early, with the Granddaughter screeching around the house. It was very happy screeching so we didn’t mind. It was nice.

And she called me “Gwandad”, and Herself “Gwanny” for the first time which the best present anyone could have. 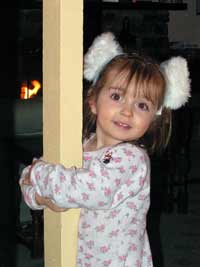 My Granddaughter learning to poledance

The Daughter took over the kitchen for the day. She is a great cook and loves cooking, but is very modest about it. So I had nothing to do all day except relax. And Herself took thing easy too, so she was happy, as taking things easy is her favourite passtime.

Then later in the day, the Daughter’s Fella’s mother arrived. We all had dinner. It was a lovely meal. The food was beautiful and a little exotic [all sorts of herbs and spices creeping in where you wouldn’t expect them, but that the Daughter’s cooking for you]. The chat was free and easy, and everyone had a laugh.

The Daughter’s Fella’s mother left later in the evening as we had no bedspace left anyway.

So eventually the Daughter persuaded us to play poker. She’s been at us to play for a long time. I used to play decades ago, but haven’t picked up a pack of cards since.

It was a friendly game. We played for tokens, not money, and we had a great laugh. We had a few sups while we were playing, so it was very relaxed. Too relaxed. It was half past four in the morning before we realised the time. Needless to say, I beat the pants off the lot of them.  It takes a sound head to play poker.

Presents? There were lots of those. Mostly for the Grandchildren, which is only right. Among other things, I got a cardigan, which I’m wearing now and is very comfortable.

But the best present I received was a house full of happy family.

It was the best Christmas I can ever remember.