I bought myself a new toy on Thursday..

It had to be Thursday as they give us Wrinklies a discount out of respect for our seniority.  Anyone over sixty gets a ten percent discount on Thursdays, which is nice.

Anyhows, I bought myself a new hedge cutter.

I toyed with the idea of a petrol one, but I had one of those in the past and found that after holding it at near arm’s length for any time is a real pain in the … well … arms.

I toyed with the idea of a battery one but I have one of those and I have somewhat lost faith in batteries as the fucking things need charging all the time, at 9 hours a pop.

So I decided to go for a mains driven one.  It somewhat restricts the cutting area as I only have two very long extension leads, and even daisy chaining them doesn’t reach the far pastures of the Manor.  Those areas that my leads don’t reach will just have to trim themselves.

I browsed around and found an interesting yoke.  It’s telescopic!  It’s massive!  It’s fucking heavy!  But I bought it anyway.

I had to fold down the car seats to get it home.  It’s around seven feet long even in it’s compressed state but I got it home anyway with the crate banging off my shoulder and a corner of it banging off the rearview mirror..  The only problem then was that it was pissing rain so I couldn’t play with it.

On Friday I decided to have a go.  I linked up my extension leads and dragged the whole lot out onto the lane.  The hedge there hadn’t been cut in rather a loooong time, and had reached the stage where even I was getting a tad embarrassed.  So I slung the sling over my shoulder and pulled the trigger.  Well, fuck me but it is a great yoke.  It sliced through the hedge and I realised it was even trimming the smaller branches [shows how neglected the hedge was?!].  Having hacked the side of the hedge, I twiddled the cutting end at an angle and then cut the top off the hedge.  Normally I would have to sway on the top of a battered old stepladder to do that.

I was just finishing off and the lane was full of hedge cuttings, when a fucking 4×4 cam barrelling down the lane.  Before I could stop him, he ploughed over my hedge cuttings and fucked off.

I have to hand it to him.

The whole lane to drive on and a mountain of hedge cuttings, but he still managed to find that one precious spot where the plug and socket were under all the mess.  Naturally he broke them.

Elf and safety wouldn’t like it, but I carried on trailing the smashed connection behind me.

After all, it’s only electricity. 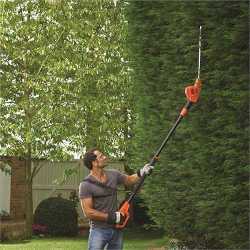 Not me, but the cutter is the same