Schools advised to have gender neutral toilets and uniforms to support transgender pupils.

Oh sweet fuck!  Someone please tell me this is a joke?

Back in my time when things were reasonably sensible, there were two genders – male and female.  Mother Nature very kindly provided us with a broad hint as to which was which by putting a plug on one and a socket on the other.  In fact the first words from the midwife are rarely "it's a baby" but rather "it's a boy" or "it's a girl".  Nature's little hint was so obvious that no one could miss it even from the instant of birth.

Now we have entered a world that is all touchy feely, and ever so gentle with people's sensibilities where everyone's feelings must be considered as we don't want to offend anyone.  And there are now more genders than you can shake a stick at.

There are males and females.  There are homosexuals and lesbians.  There are bisexuals, trisexuals and non-sexuals.  There are transgenders, transsexuals, non-specific genders, crossdressers and people who think they are cats.  And of course they all have to be catered for in this oh so sensitive world because we couldn't anyone's feelings now, could we?

I blame the marriage referendum.  It sent the message to the world that we were oh so gay friendly and the streets were covered in rainbows.  I have nothing against gays. or whatever they're called but changing my gender to show solidarity with my gay and lesbian friends is going a bit too far.  However, judging by the headline in the paper a massive proportion of the population are suddenly very confused about what they are.

Of course some people will claim that I protest too much and that I am denying "my female inner self".  They can fuck off too.  I have tried knitting [to my daughter’s disgust when I sent her to school in a jumper I had knitted] and was once quite deft at macramé, but I did them not because of any gender confusion, rather out of curiosity to see if I could.

When I go for a piss, I grant that there can be some confusion but that is only down to the irritating sense of humour of some publicans.  Ladies and Gents is straightforward enough.  Lassies and Lads I can cope with. The Irish only ones I grant, can cause some confusion as "Mna" is often mistaken by foreigners as a misspelling of Man [it means “women”!  Heh!].  But when they enter the realm of "Dolphins" and "Porpoises", or some such nonsense it just gets silly.  Anyway who gives a fuck?  Many times I have been in the Gents when a woman wandered in, and conversely I have wandered into the ladies, sometimes by mistake and other times not.

This gender thing really is a load of bollox. 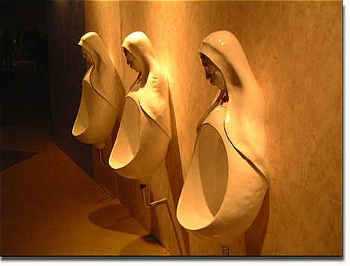