This is going beyond a joke.

He is apparently praying for the Domino Effect.

His vision is that Ireland should "lead the world" in plain packaging and that as soon as Ireland implements the measure, all others will fall in line and impose their own laws.  He seems to overlook the fact that his country introduced their measures back in 2012, so why Ireland should suddenly become the "leader" is beyond me.

“I cannot think of anything that could be done to tackle tobacco more effectively than Ireland introducing this measure,” said Prof Daube of Curtain University in Perth, who chaired the Australian government’s committee that recommended plain packaging.

So banning smoking in the workplace and in a lot of open spaces, the banning of all advertising and displays, the stigmatisation, bullying and "denormalisation" of smokers and all the massive tax hikes were just a mistake or maybe just a warm-up to the real killer – the plain package?

“We showed it could be done, but we are a low-population country on the other side of the world.”

It was important the Government was not bullied out of proceeding by the “zombie arguments” of the tobacco industry, he told a meeting organised by the Irish Cancer Society in Dublin.

I love the use of the words "bullied" and "zombie arguments"?  Words that are used frequently to describe the Anti-Smoker mob?

Although it was early days to decide whether the Australian initiative has been a success, the early signs were encouraging, he said. Daily smoking rates were down from 15.1 per cent to 12.8 per cent in three years (compared to 21.5 per cent in Ireland).

I would hardly call two years "early days"?  Maybe it will be "early days" until such time as they fabricate some figures?  As it is, his decline in daily smoking rates are frankly just zombie figures as can be nicely illustrated with a small graph – 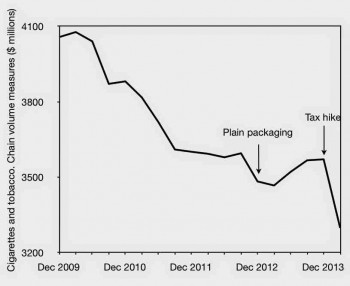 Prof Daube said the measure was no “silver bullet” but it was one of the most important elements of a comprehensive tobacco control policy. “Crucially, it has an impact on children and young people. It turns cigarette packs from glossy fashion accessories into something you don’t want to be seen with.”

"Silver bullet" it certainly isn't.  An irritatingly damp squib would be more on the mark.

I'm glad he mentions the cheeeeldren.  I would have been disappointed if he didn't.  He doesn't have much of an opinion of them though – kids only smoke so they can have a fashion accessory to flash around?  Maybe he should suggest they rob an empty packet and flash that around instead?  It would be a handy place too to store the fags they normally rob in ones and twos from their parents, siblings or friends?

Nine EU states have objected to the Irish proposal and the tobacco industry has complained plain packaging interferes with its intellectual property rights.

The ICS said yesterday its legal advice was that the measure curtailed, rather than eliminated, these rights, and that these had already been curtailed by previous health measures, such as the requirement for large warning notices on cigarette packs.

That really sums up the Anti-Smoker movement in a nutshell.  They ask for something small, such as a little warning or a ban on smoking in buses, and once they get their foot in the door they worm, lie and inveigle their way in further and further until they demand the entire package and a smoking ban everywhere.

These people really are a danger and a menace.