I have a passport [or two].

It’s tucked away at the back of a drawer just in case someone suddenly invites me to stay with them on the other side of the world.  You never know?  These things happen?

The only times I have used it in anger was when I travelled to France.  Now one of the big deals they made about the EU was that there would be no more borders and no need for passports, but you still need a passport to travel, which sort of sums up the crazy bureaucracy of the institution.

They are brining out a new design for the Irish passport, and to put it mildly, I am really pissed off with the new look.

Because it is dominated by a fucking bedpan. 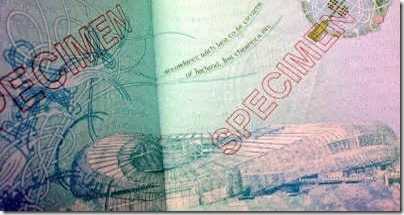 My objections are threefold.

Firstly it is a fucking sports stadium and I fail to see why that should represent any part of my cultural identity.  If they showed Newgrange or the Book of Kells or somesuch I would have no problems but a place where they kick a fucking ball around?

Secondly, if it’s representative of anything, it is the perfect example of modern Ireland – where by flashing money around, international corporations can have their names permanently bleated every time a place is mentioned.  I strongly object to the whole concept where a business can buy a landmark and insist that their name is used at every turn.  What next?  Am I going to wake up one morning to find myself living in Sony Wicklow?  Will I have to travel on the Toyota M11?  They can go fuck themselves.  That stadium will always be Lansdowne Road as far as I am concerned and I steadfastly refuse to call it anything else.

Thirdly, it is a hideous edifice.  To me it looks like some architectural freak that has melted in the sun and gone horribly wrong.  It could be mistaken for some kind of extra terrestrial mothership that has developed a leak, crashed and is draped across the Dublin suburbs. To coin a word – fugly.

Worst of all, it just looks like a bedpan.

But then I suppose that is somewhat symbolic of modern Ireland?

What better way to represent a nation that is constantly being shat upon?