Around forty five years ago my father and I went on a raid up the valley.

We raided a birchwood for saplings and brought home a whole load of ‘em in the boot of the car [an MG 1100, if anyone is interested]. 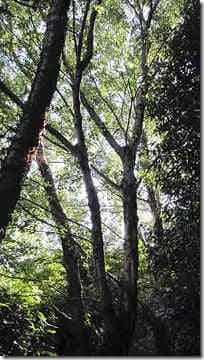 In the intervening years, those saplings along with a whole mixture of other species have grown voraciously and we now have the two woods on The Manor – the North Wood and the South Wood.

I noticed a couple of years ago that one of the trees looked a tad sickly.  It was leaning precariously out over the lane and looked in imminent danger of collapse.  However it didn’t so I sort of put it on the long finger.  I mentally names it “The Dead Tree”, and left it at that.

We had some fairly strong winds for the last few days.  I didn’t think twice about it.  But yesterday I had to go out.  The first thing I saw was that one of the larger branches off the Dead Tree had fallen.  I examined it for blood but it seemed clean enough and if it had killed someone, presumably someone would have mentioned it.

I realised that something had to be done.  There were two more major branches that looked like they wanted to take a dive so I decided the time had come. for some action.

Tree felling is NOT a solo job, so I phoned around the lads from the pub.  Amazingly not one of them was available.  A couple were even washing their hair which is a first.  The fact that it was still howling a gale and pissing out of the heavens might have had something to do with it though.

Some one has nicked my power chain-saw and all I had was an electric one, so my first job was to find a few extension leads and string them all together to get power out to the lane.  I managed that with about three feet to spare.  I shinned up the ladder and started work.

Take it from me – standing at the top of a twenty foot ladder hanging on for dear life with one hand and wildly swinging an electric chain-saw with the other hand while in a gale and pissing rain is NOT a fun way to spend an afternoon.

I finally got the first branch, but then ran into a problem.  There were only two ways I could prop the ladder near the second branch.  One way I couldn’t reach the branch properly and the second way involved standing on the ladder directly underneath the branch to be cut.  Again, not a very good idea.

In the end I just took the bruit force approach.  I just cut the fucking tree at the base and let the whole lot crash down.  It made a bit of a mess of the neighbour’s hedge and he really shouldn’t have parked his car just there either, but you can’t make an omelette etc etc.

I’m knackered today.  I still have to go out at some stage and cut the fucking tree up into something that will fit into a fireplace but that can wait.

At least I’ll have some fuel this winter?