Through circumstances entirely beyond my control, I found myself spending yesterday evening in a strange house doing some babysitting.

I didn’t mind too much.  It was a simple case of locking the kids in their bedrooms and then turning up the television to drown out their shouts and cries.

Purely out of boredom I crossed to the Dark Side and watched bits of the Eurovision Song Contest.  Apart from anything else, the screeches on-screen harmonised rather nicely with the screams from the bedrooms.

For those of you who are not familiar with this annual bunfight, the Eurovision is a contest where the aim is to either come second or last.  There is a certain kudos in getting no votes at all and there is fuck all kudos in coming first, as then you have to fork out the equivalent of the Greek National Debt to host the contest next year.  Voting is done on the basis of geography, so the Russians all vote for each other as do the Balkans, the Scandinavians and the Mediterranean lot.  Ireland doesn’t have many friends so thankfully our chances of coming first are pretty slim.

Azerbaijan lost last year by coming first so they had to host the party this year.  Heh!

The song contest used to be about songs and singing.  That was in the Good Old Days.  I’m not sure quite what it’s about now, as the “songs” bear fuck all resemblance to music.  Each act seemed to consist of people prancing around and miming [very badly] to the cacophony that blared over the speakers.

Jedward did their stuff of course.  I was delighted to see that they had gotten rid of that fucking hairstyle at last, but sadly that didn’t improve their act.  They pranced and screeched around the stage dressed in some kind of metallic armour [I itched to try out a cattle prod on them] and ended their act by standing in the middle of a fountain.  Don’t ask!  All in all the quality of their act summed the whole contest up very nicely – tasteless and raucous.

It’s a testament to the programme that I can’t remember a single song.  I do remember a rather tasty young lass reading out the scores – she can decorate my breakfast table any time. 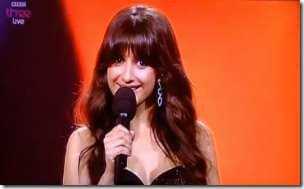 An then there was the Russian entry.

I’m not quite sure what to make of it, but I did notice a strange tingling in the loins.

I must be getting old.