The Nanny State has spoken one again.

I am no fan of sun beds.  In fact, I am not even sure that I have ever seen one in operation.  I hate the things and all they stand for – pandering to the egos of the brain dead Baywatch wannabes.

Frankly I think sun beds do a public service and should be encouraged. Anyone who is so vain that they have to barbecue themselves to supposedly look attractive deserves to be fried.  Good luck to them.  Sun beds are really up there at the top of the league of Darwinian devices. Like bungee ropes, their sole function to rid the human species of the vain and the stupid, and in that respect they should be encouraged, not banned.

Once again I am at a loss to understand the thinking behind this proposed ban.   Is the Nanny State trying to outlaw death?  Suppose, just for a moment, that they manage to ban absolutely everything that may cause death or injury, directly or indirectly, then what then?  Of course we would all be lying in padded boxes. with intravenous drips and breathing pure oxygen but we would still die.  It would be an unbelievably boring death, but the Grim Reaper would still get us in the end.

I suppose one argument in favour of the ban would be that it would cut down [very very slightly] on the demand for hospital beds.  We all know that Mad Cow hasn’t a fucking clue what to do with the sick and the infirm, and that’s why they made her Minister for Health.  Judging by her record over the last few years, she has done more to kill the population of Ireland than any sun bed.

Maybe we should just stick Mad Cow in a sun bed and melt her down.

I don’t think they make ‘em that big. 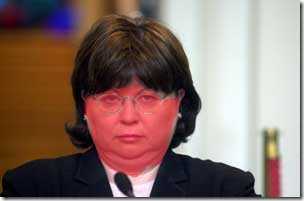