I am contemplating giving up the pipe.

Well, maybe I won’t give it up altogether, but I was toying with the idea of switching to cigarettes.

There is a yoke on the market called the Electronic Cigarette, and I was thinking of getting one.

This cigarette has a little battery in it, and a little capsule of nicotine, and it is smoked exactly like a normal cigarette.  Except that you don’t light it.  When you draw on it, the tip even glows red.

Because there is no combustion, it falls outside the Nanny State Laws.  It can be smoked anywhere.  That alone is as appealing as the thought of Sharon Ní Bheoláin making me breakfast in bed.

My money is on the barman to be the first to tell me to leave.  I won’t leave, of course because I am within my rights to stay.  Next there will be the complaints from the non-smoking holy-Joes who will demand that I be thrown out.  I’ll ignore them.  With a bit of luck, a few smokers will have drawn the conclusion by now that smoking is OK, and they will light up too.  It could be a fun night.

After that, of course I’ll have to raise my sights a bit.

Maybe I’ll get Herself one to double the effect.

Maybe we’ll go and visit someone in hospital, and happily puff away as we walk the corridors.  Or maybe we should wander into a Garda station or two and casually lean on the counter and discuss the state of crime in the nation, while merrily blowing smoke/vapour all around the place?

We might even top off my expedition by taking a visit to the Department of Health and demanding to see Mad Cow Harney [just to tell her what a useless lump of lard she is].  We shall of course make a point of never removing the cigarette from our mouths.

If enough people take up this idea, we could cause enough confusion in the system that real smokers may start to slip through the net. 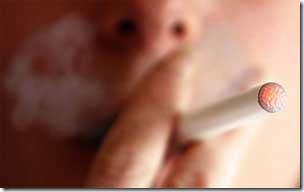