When one is on a pension, the opportunities for making an extra few bob are few and far between.

Herself got all excited on Sunday when she was reading the papers.

Apparently one of the great booming industries in Ireland at the moment is the sex trade.

“We could do with some extra money for the holidays,” she said, as she got out her knitting bag.

“Caveat emptor,” she replied with a snigger, as she cast on a new row of stitches.

“What about physical harm?”

“I’ll try to curb my temper,” she said as she laced into the plain and the purl.

She certainly seemed to have all the answers.

I like Herself to get out and about.  Between that and the macramé classes and the gardening club, she’ll have a busier life than me.

And the extra €5 a night will be handy. 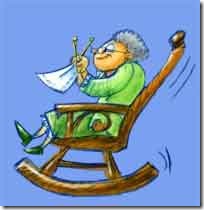